What have you done to your 5 ton this week?

Yeah, the old vents definitely stick. I went around and wiggled mine and all 3 axles "exhaled."

Big Mike's sells a different kind of vent that doesn't require plumbing vent lines. I'm unsure just how tightly they would seal during a fording excursion though.

SPRING LOADED AXLE, TRANSMISSION, AND TRANSFER CASE VENT VALVE DESIGNED FOR WATER CROSSINGS. THE CENTER OF THE VALVE LIFTS UNDER PRESSURE ALLOWING UILD UP TO ESCAPE, BUT HAS A CONICAL SHAPE TO SEAT TIGHT INTO THE BASE OF THE VALVE PREVENTING WATER FROM ENTERING. 1/8 NPT THREAD PART # 5196397 NSN...

Doesn't matter, he's out of stock.

I had similar doubts about their water tightness but now I guess I'm partially following the fording setup. The barbs stopped the seeping at the fill plug but the the middle axle pinion is still leaking pretty bad and I replaced that gasket a year and a half ago. Guess I should have used glue with that gasket.

Finally put my 16.00s on. Got one painted and decided I’ve had enough of the sanding so I’m gonna get the rest sandblasted Thursday. It rides and looks way better. Cruises at 60 in 12th gear at about 1700 rpm.

Those look amazing! They're twice as wide as the originals

Bought a few more items/tools for the 5ton...

US6x4 said:
Those look amazing! They're twice as wide as the originals

Thanks! Yeah they definitely weren’t fun to wrestle with.

Crf450x said:
Thanks! Yeah they definitely weren’t fun to wrestle with.
Click to expand...

Wearing a hernia belt while wrestling with those maybe isn't a bad idea...I'll get there someday.

US6x4 said:
Wearing a hernia belt while wrestling with those maybe isn't a bad idea...I'll get there someday.

No they’re probably 80-90%. With the amount of driving I do they should last me a long time. 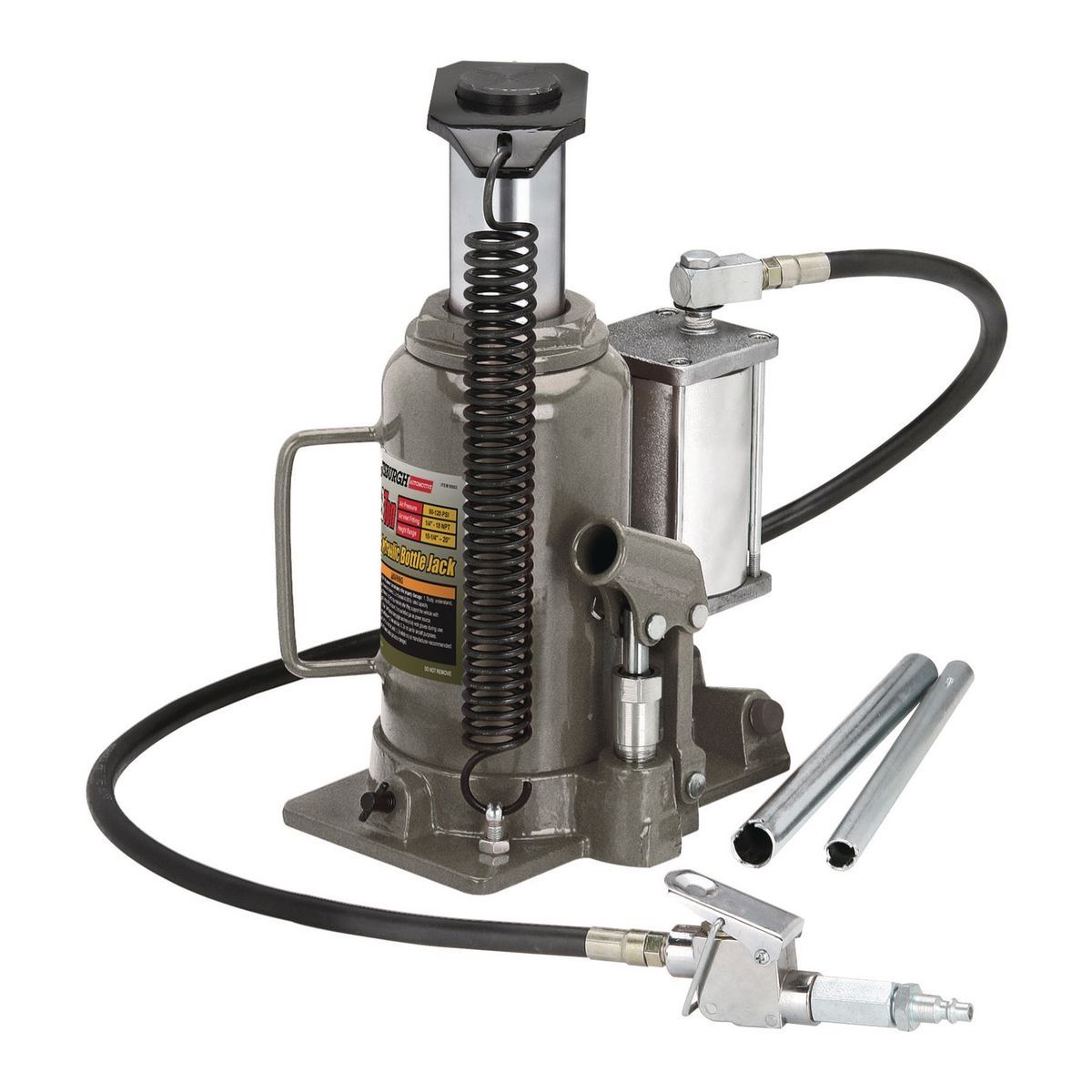 Jack the truck up using its own air system (or still hand pump if the engine is inoperative). Your red jack is still plenty useful in combination with the air jack though.

Ajax MD said:
You need this:

Jack the truck up using its own air system (or still hand pump if the engine is inoperative). Your red jack is still plenty useful in combination with the air jack though.
Click to expand...

.
Throw in a few big blocks of wood along with the new jack.
Just in case...

I got myself one like it from Northern Tool about a year ago.
Definitely nice to have - again - just in case

I ordered a EGT and boost gauge setup from Those Military Guys. Took me about 3 and a half weeks to get it but it is finally here. They don’t specify online that they are build to order so if you do get one it does take a little while. Overall I am really happy with the kit. It was pretty much all plug and play. All I needed to do was drill and tap 2 1/8” NPT holes and connect everything. Now it’s time to turn up that injector pump!!

.
Nice looking ramps too - and with "jackstand" support in the middle.
Those front wheel ramps definitely appear to cause a nice long slope up into the truck...

I put air in a tire. I got to the shop this morning and found this >>

If you aired up that tire and found it deflated, the Schrader valve in the stem may be a little sticky. Some of my old ones didn't seal well until I shot a tiny dab of silicone spray into them.

Air it up and squirt the valve stem with soapy water to see if that's the problem.

Got this old girl from an airport and was incredibly surprised. After a steam wash, PMCS, touch up paint, and exercising the truck it's mint. Absolutely mint.

fuzzytoaster said:
Got this old girl from an airport and was incredibly surprised. After a steam wash, PMCS, touch up paint, and exercising the truck it's mint. Absolutely mint.
Click to expand...

So I went to the beach the other day with friends and with my M923 and got stuck. Shamefully a Tundra with mud tires got me out. I guess as a newbie I did not realize the front wheel drives do not engage when still rolling in gear even at 10 mph. Then again, when in neutral, I hear the pressure up and the pressure release when flipping it but no way of telling if it really works. Not my first time, I similarly got stuck with a F250 when the front wheels would not engage readily, having to flip between 2 to 4 wheels 3 times. My Titan was more consistent.

Anyways, she seemed to sink the next day in mud in the woods next door and I think I almost got stuck there again despite this time having a positive engagement by the sound of it but could not tell if the front wheels were actually working it too. I am a bit shy too on the gas when going through, I think I lack skills. She is quite heavy too and just bought a valve stem tire deflator kit for next time trials.

Also, I tried 4 low (I know, not going backward with it), and I released some air pressure to engage it. Usually it is no problem while in neutral. However this time it finally engaged when in 4th level gear. Did not seem like the front was engaging either, I do not know. Basically I was wiggling the gear while actuating the Low setting and when it popped it pulled the gear to 4th and I could not put it in 5th nor neutral, let alone in reverse (safety feature?). The rear wheel spun but I still was stuck and no way of telling if front was engaged. The washer is there and actuating the switch, though.

Another issue is my parking brake. It used to have a sort of detente that put it in tension to keep it up, but now it is loose and I have to put a heavy bag in front of the break handle for it to not flip down on its own before I put the wheel chalks.

I also did a coolant flush, pulling all the hoses out and hosing down water wherever, and there was a lot of rust. It seems like black coolant reservoir on the NHC gets rusty at the bottom. The guy who sold it to me had no visible coolant level to it, just a moist puddle of rust (ugh!). He told me she got fixed by a diesel tech last year and then kept in a garage and not moved around, saying she was ready to go. So I left with the truck and drove it like that for 300 miles without checking the coolant situation , trusting him (aouch). So at home I put back in about 4 gal of pure antifreeze and 2-3 of distilled water, but still get a bit of rusty water for a couple seconds at the bottom of the radiator drain when opening up. I think I am going to get some of that red diesel antirust coolant from amsoil. That reservoir tank looks hard to replace because the bolts holding it in place also hold the exhaust to the exhaust manifold, and I do not want to mess with that yet.

Anyways, was good fun. Next is going to oil and transmission change.

m715mike said:
I put air in a tire. I got to the shop this morning and found this >>

Try Tireject. It takes at least 20+oz. it sure worked on my two 16x20 tires. However, mine took several days to go flat. I suspect mine either had a bead leak or O ring link
G

The past couple months since we got through the freak ice storm and have started to get into summer I have been working the 5 ton like a dog. Lol. I actually doubt the 5 ton even notices that its being loaded over. But what have I done with my 5 ton, hauling multiple over the cab loads of destroyed hazelnut tree debris from the ice storm, hauled 5 yards of garden soil, hauled 10 yards of fill dirt and multiple loads of 1500 pound root balls dug out with the excavator, and this week has been root balls, whole 20 foot dead cherry trees, and over the cab loads of blackberries.