I'll have to do some questioning at the shop. Ill see what I can do though.

I'm guessing the H110s are the split axles?

The H110s are the Eatons with the drop out chunk and waffle ireon cover. the split axles are Timkens.

gentrysgarage said:
The H110s are the Eatons with the drop out chunk and waffle ireon cover. the split axles are Timkens.
Click to expand...

To clarify, the “banjo” type axle (not Timken split type) are GM corporate manufactured in the CCKW and G749s.

Well, seems I have a new found problem... compulsively buying MVs... i picked this g506 up when I was supposed to pick up a parts cckw for mine and an m211 302. However, after looking at the 506 and mulling it over in my head... i elected to use the cckw more for parts then anything. The 506 has little to zero rust, has all the glass and everything. Nothing is missing except an engine side panel. (Because of yours truely...) i still bought the 302 and brought that home along with the truck.

So, current plans, though they seem to change about as much as I change shirts..., are to scavenge the 270 for parts in the deuce, namely the front engine mount and a few other things, shove that all in place of the 235 currently in the 506 as well as using the Warner 5 speed i bought. I already know ill have to have a driveshaft made which isn't a big deal. I have both shafts from the cckw and the 506 to take parts from.

As much as I really don't want to part out the cckw, the rot in the cab and doors is far more severe then I thought it was.

Symbol on the door indicates use by the Sixth Service Command...Nice truck!!

I have always liked the G506. I think that is a solid plan. You need to get rid of the M102 trailer body for the bed and find a correct bed or make a correct looking bed, but otherwise it looks like it will clean up nice for you. Keep us posted.

Alright, finally time for an update. I ended up having to pull the transmission, clutch and flywheel to get the truck running. The ring gear of the flywheel was broke in half so after replacing that... i burned up the starter. Figures... i bought a starter and threw that in and had the engine spun up and running. Runs well, very little smoke on start up. I was fighting with fuel problems for awhile but have them (mostly...) worked out. Its titled, licensed and ready for the road! The 302 is still in the plans though, just collecting knowledge to get it done. Once I find a rearend for my federal then ill break this truck down to swap the engine and transmission. 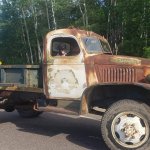