So, I'm about to put some stuff in my cab that might be attractive to thieves.

Obligatory: I know nothing can be fully secure, I just want to prevent opportunity thieves, drunks, amateurs and/or slow someone down as I also intend on sleeping in the back while traveling. Anyone seriously trying to break in would make a racket and wake me.

It should be noted that I've since rebuilt my cab above the doors with much thicker steel than the original hard top. So, the walls/roof now are fairly secure.

The idea being that they'll be relatively quick to put in place so when I go to dinner or something it won't be a big hassle putting them on.

The more I thought about this, I also thought, well, let's make them a little bullet resistant (say 1/4" steel) and maybe cut a wide, slot about eye height so I could actually drive while they were installed, if such a situation ever arose.

Comments? Has anyone done shutters before?

Then there is the stuff the Wrangler crowd likes: https://www.carid.com/2018-jeep-wra...s-vicowl-windshield-protection-878862935.html

Makeshift gun trucks used a steel plate that covered the complete door. It was mounted with brackets grabbing over the top over the Deuce door (window rolled down) and a plate with a sight slit extending up where the window would be.

I had a pic but can't find it. This is close: https://www.ewarbirds.org/vehicles/1967reoM35a1.shtml


The security risk you are trying to mitigate dictates your choice of material. 1/4 in steel is ok to resist handgun fire while passing through a riot, maybe .38 cal at an angle. Anything more and you need 1/2 in plate - but is that your #1 concern?

Is it to protect yourself inside the truck and shelter in place while you are being targeted? If they light a fire under your truck, you'd be toast (pun intended). You would need a ton more security to resist this particular threat and, for starters, would want to deny opfor the opportunity to catch you stationary in the first place. Being a sitting duck is on you. Not even a $2Million armoured limo is designed to be a motionless target against determined suitably armed opponents. It is designed to let you live long enough to get TFO of harm's way.

If it is to defend against belligerent drunk idiots that toss rocks or kick at the door, I would actually go the other way...aluminium checkerboard. Tough enough against an idiot trying to vandalize it but easy enough to cut and install, as well as remove or replace.

Also consider the 3M window security film as an addition that makes it impossible to smash through. https://www.youtube.com/watch?v=cZy4DJHM_fs
Last edited: Aug 19, 2019

I have those 'personal' security alarms, Which are Seriously LOUD, and we attach them to the doors when parked so that the cord operates them should the door open.
Cheap, and very effective. Especially at shows camping over.
Last edited: Aug 19, 2019

I am putting electronics in the cab and want to avoid smash & grabs.

1/4" steel plate is ~10lbs per sq/foot. That would make the door shutter around 45 lbs which is waaay more weight than I'm looking for. I sent away for a sample of 1.5" UHMWPE which is 8x lighter than steel. All together, the area of the windows is a little under 16 sq/ft. The UHMWPE is just an experiment, I'm not sure about. I'll probably end up going with 1/8" aluminum plate which is 3x lighter than steel.

Anyone can go overboard, sounds like you are with small arms resistant steel.

Kiss
Why not just a frame with chain-link style guard. You could leave it in place 24-7 or have it flip up. I'll try to post an example after I get off work.

How about replacing the side window safety glass with laminated glass? Front is (or should be) already laminated.

VPed said:
How about replacing the side window safety glass with laminated glass? Front is (or should be) already laminated.
Click to expand...

I want something that can't be kicked in, or "quickly" smashed. As with all upgrades, there is a sweet spot between weight, cost & convenience. Bullet resistance polycarbonate or acryllic is light but expensive (~$100 sq/ft+). If I can't get the cost down to something in my budget range, I'm just gonna go with something that can't be easily kicked/smashed in and call it good.

Prices on Alibaba are very good, but I'm wondering about shipping which could be stupidly high.


gimpyrobb said:
Anyone can go overboard, sounds like you are with small arms resistant steel.

Kiss
Why not just a frame with chain-link style guard. You could leave it in place 24-7 or have it flip up. I'll try to post an example after I get off work.
Click to expand...

As I said in the post just before yours, 1/4" (and even 1/4" only stops the smallest of stuff, I would be counting on deflection angle more) steel plate is too heavy and I don't think I'll go with it as the door shutters would be around 45 lbs. If I just throw the idea of bullet resistance out the window, I would go with maybe 1/8" aluminum plate. It would weigh about 8 lbs for the door shutter, and I would store it on the door itself.
IF, and it's a big if, I can find a cheap source in China that will sell me a small amount (I could use some more for another project, but still it'll be a small order) of some bullet resistant composite like polycarbonate, etc. for cheap (again shipping?), I might consider that. I have at least a year before my world trip (if it ever gets off the ground) starts, so I got time.
Last edited: Aug 21, 2019

Expanded metal. Light, strong, cheap, and easy to get and work with. You can even permanently install it over the windshields and be legal in most states. Not bullet resistant, however Amazon has lightweight bullet resistant fiberglass sheet of various thickness that comes in 4'×8' sheets.. armor can go inside.

Jeepsinker said:
Expanded metal. Light, strong, cheap, and easy to get and work with. You can even permanently install it over the windshields and be legal in most states. Not bullet resistant, however Amazon has lightweight bullet resistant fiberglass sheet of various thickness that comes in 4'×8' sheets.. armor can go inside.
Click to expand...

Never heard of the fiberglass stuff. I'll look into that.

Ok, a little cheaper than polycarbonate. 1/2" is rated against most handgun fire, 5 lbs per sq/ft, so almost 24 lbs for the door shutter.

Just a note, I searched the internet and found a significantly better (like half) price (also with free shipping).

Ok, I kept looking around the internet. I strongly recommend if you buy this stuff to search. I have found stuff at 1/4 the cost as listed on Amazon.
Last edited: Aug 21, 2019
D

You already have some security due to the height of the cab. Most folks will have to climb up on the vehicle to look inside. Not that they won't but it does ruin the "I was just walking by" excuse if someone spots and confronts them. Something as simple as a piece of cardboard with aluminum foil would be a place to start for the side windows. Coupled with a sun screen for your wind shield and it will look like you are just trying to keep the cab cool. If you make the truck look armored against theft, you could be making it appear as a more desirable target. "Don't know what's in there but with all that, it has to be valuable!"

Since a lot of the smash and grab thieves are younger, put a loud high pitched piezo alarm horn in the cab as a deterrent if they do decide to force the issue. If their ears are in pain, they will likely just leave.

Your best investment would be insurance that covers whatever your putting in it.

Have you added exterior keyed locking door handles to your doors? Lots of threads on them already.
Last edited: Aug 21, 2019

doghead said:
Have you added exterior keyed locking door handles to your doors? Lots of threads on them already.
Click to expand...

I've narrowed the door lock to either the dead bolt I saw someone attached below the door or a container lock I found that I'll put on the door. 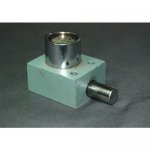 This is an example, not necessarily the one I'll be using. Cabinet locks are more common (and cheaper, but only designed for cabinets - I would want something stronger.

This container lock looks promising, it doesn't come with the brackets, but it's designed to be welded and that's probably how I would attach it (welded to brackets).

There is also the philosophy that if something looks too hard to break in that maybe I should break in to all these other cars instead.

As for insurance and not giving a rat's ass about what's in the truck: I can afford to spend a little bit to avoid an insurance claim that may occur while I'm in New Delhi. I've already mentioned there is a sweet spot (an arbitrary sweet spot based on my feelings) between cost/weight/effectiveness. My door/windshield glass is acryllic - I'm not counting on that being able to stop anything but the wind.

I am putting inverters, a monitor & a PC in the cab. The cab will also have a hatch which will lead to the camper in the bed WHERE I WILL BE SLEEPING. I don't think a little security is a bad thing. I will also be putting locks on the hood, the battery box, the fuel tanks.

Yes, nothing will work all the time, I just want to slow people down or alert me. I will also have camera security (hooked up to said PC) that will double as my backup/forward/side cameras. I don't live in Fort Apache, I'm not even concerned about this for the US - this is for international travel or Detroit.

I am trying to keep it simple, but there is a vast gulf between tin foil and 1" steel plating. I am looking at something in-between.

And if I get shot dead while outside the truck you can all say you told me so.
Last edited: Aug 21, 2019

Conceal Carry works too. and a Blue heeler.

Conceal carry might be a problem overseas, I might bring a flint lock though, many gun regulations don't apply to it because it fires so slowly. I have an aussie, but she's a sweetheart.

It would be pretty slick to incorporate roll down shutters into a cab visor above the windshield kinda like a hybrid between a garage door and the shutters on the GTO in The Punisher movie.