Time to try again to make a list of European salvage yards and part suppliers now we have such an extensive European Member list.

Please, this is a thread to help European and other SteelSoldier members to get parts or complete trucks inside Europe.

- add a new post with clear country indication, address and link to the yard - supplier.

- one supplier per post, so we can keep the information easy usable

comments to a minimum but feel free to add experiences you have with the people there.

They used to have hundreds of trucks but they are winding down. Friendly people, but sending outside the Netherlands by mail is a problem for military material.

Netherlands - Staman Jeeps and some tracks

"The World's biggest supplier of army jeep parts". Has also several other things standing around including tanks, half-tracks and other drooling stuff. They used to have a small museum nearby.

I think they just bought up surplus parts from the POMS or US bases in Germany
Last edited: Nov 1, 2019

After those years that have passed the pickings may be slim

This will be good! Thanks, Robo McDuff:

Indeed this will be Good. I can not wait to see how much equipment still exists in Europe and other theaters.

And to see that it rusts somewhere else is sorrowful. Someone's loss is someone else's gain, hopefully the parts and vehicles are used somehow besides scrap.

Thanks for the comments, which will bump the thread, but we need replies from the other European members with additional suppliers in Germany, Austria, Denmark, France, Belgium etc etc.

Found this one looking through my old posts, an US surplus scrap yard in southeast France, south of Lyon

Germany - Lots of pictures and some parts as well

Not sure how active the site still is. The pics section seems a bit dead, not actualized since 2014

The shop seems alive, but not sure, check it out first before ordering.

For those with verrrryyyy deeeeeeep pockets in love with very big stuff.

Close to the Dutch army training grounds, they bought up a lot of surplus stuff, then switched partly to cranes. Boy, those cranes are HUGH.

Not sure if you can get spare parts there. They also have a private museum, absolutely not accessible for public unless you are there in person and beg on your knees. They do something for schools though. I was there a few times

Robo I think you are doing a Great job at being proactive in getting a list compiled to help both the supplier and the buyer of parts.

As many Jeeps that have been built and the many left in Europe I think that there is still unopened crates of them there.

cucvmule said:
As many Jeeps that have been built and the many left in Europe I think that there is still unopened crates of them there.
Click to expand...

When bringing my old Peugeot 307 SW (now used as work car for the forge) for necessary repairs to a small local garage, found this 2018 calendar on the wall (below the usual pics of females). 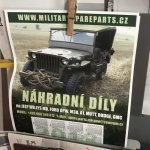 Militaryspareparts.cz. No further information, but looking at the calendar they are still active. Looking at their website, they have a jeep body in a crate. Located about 30 min NW of Prague, just beyond Prague Airport.
Last edited: Dec 4, 2019

Robo McDuff said:
Looking at their website, they have a jeep body in a crate.
Click to expand...

Whoa. Still in the original wrapper!

This is a good reference website with a lot more info on where to get what in which country than I can ever scrap together for Europe alone. Probably several people on this site are already familiar with them. Continuing with this thread is useful; get some nice pics and personal experiences with SteelSoldiers dealing with the European scrap yards, and maybe some unexpected pearls int here as well.

This is a good reference website with a lot more info on where to get what in which country than I can ever scrap together for Europe alone.
Click to expand...

That is a SERIOUS resource there, Robo McDuff.

Another Ahab said:
Whoa. Still in the original wrapper!

Brother Ahab, If there's a new jeep body still in the wrapper, you can call me Ishmael.

Another Ahab said:
This will be good! Thanks, Robo McDuff:

Great stuff Robo. I'd like to rent an apartment next door to Staman Nijverdal. Subscribed.

This week I drove my son and one of his apprentice blacksmith students to an art exhibition in Vienna, Austria. That stuff does not really turn me on, always said I am a culture barbarian. So I used the time to visit another "exhibition": Camo, a surplus vendor just 20 km south of Vienna. Good for a very big depression, but maybe he has the parts I need for the M51. He has at least five M-39 5-tons, a Russian amphibious tracked carrier (PTS-10) that makes a DUKW looks like a toy, tow 8x8 Tatra's and other stuff. They also showed me the section with jeeps including at least two M715s and some CMCs laying around as well. More modern stuff was on the other side of the office, did not see that much.

But what my adrenaline really got racing were the four Ward laFrance wreckers. Man that really are some solid beasts. Got amazed by the door. I opened the door of one of them to check the dashboard tags: 1943. Opening and closing the door went as smooth as anything; closing it made a very solid reassuring click of steel on steel locking.

There were three M1s in reasonable condition, like here are the keys, get some work done. The tags of one of them were in German, with the identifying tag in German with French as second language. Year of manufacturing: 1943. This one had the typical curved end of the boom. The M1A1 was definitely in less good shape. It had the chisel-shaped front bumper. I think they all came from the Swiss army, who used them since 1943 at least.