From looking at the service manual, I see there are three main toolkits that seem to be referenced 57K0266, 57K0267 and 57K0268. It's unclear to me what the difference is though. The service manual seems to make it sound like 266, 267 and 268 contain different tools, but the ebay lists seem to show a lot of overlap between the kits (267 and 26

I have previously ordered the 268 kit, expecting it would have most of the tools needed for regular maintenance plus some special one if I had to pull the engine or something more extreme in the future. I'm slightly worried I'm going to ALSO have to order the 267, but I'm not sure and certainly don't want to spend the money if it 268 really has all of the common tools.

Does anyone know of an actual manifest of the 266, 267, and 268 kits and how much overlap are actually in the kits. Also who was the intended users of each of the kits?

(I've not seen an ebay listing for the 266 kit, but the service manual makes it sound like it has a bunch of tools for rebuilding the engine, transmission, transfer case and differential. These aren't things I plan to do, so I don't think I would need anything from it.)

I dont have the packing lists, but watch out on epay. I just looked up "5180-01-389-7561". There is one listed, but the description has "57k0268". So which kit are they actually selling?
It may be cheaper to check GP for "kippertool". Lots of those sold not too long ago.
And, that rivet / nutsert gun is one of the best tools I have bought in a long time.
A

the pics below for 57k0268 are from DPEQUIP's listing. They wrote the NSN for 57k0266 in the description, but the 3rd pic shows another kit on the list. Maybe one of the 3 part numbers includes all kits?

I dont have the packing lists, but watch out on epay. I just looked up "5180-01-389-7561". There is one listed, but the description has "57k0268". So which kit are they actually selling?
It may be cheaper to check GP for "kippertool". Lots of those sold not too long ago.
And, that rivet / nutsert gun is one of the best tools I have bought in a long time.
Click to expand...

Ya, I got one from a listing with a ton of pictures. So I'm pretty confident in the tools in that particular set. Should show up later this week and I'll inventory it and will try to post a listing of what was in it.

For me it was the tack, the rivet/blind fastener (nutsert?) gun, the hydraulic tester, run flat compressor, and the various crowsfoot adapters. (I'm just hoping the crowfoot that it comes with will work on the brake calipers..)
M

Action said:
here are lists from 2 epay listings. They have the exact same parts list. even the line drawn through the 1/4" hex bit...

Ya, I avoided these listings because the pictures didn't seem to match other kits I found. The ones I saw from people I'd bought parts from already seemed to show the 267 kit was about 1/2 of the stuff in the 268 kit.. but what do I know? Maybe I just wasted $200 (hope not)

Edit: I just found the same listing you did. And the 3 page inventory matches the pictures of the kit I ordered [even though I didn't order from that particular seller]. So I THINK the 268 kit includes all of 267. 266 is 'something else', maybe.
Last edited: Sep 14, 2021
M

I just found a reference with a packing list for 57K0266. It appears that it is everything in 57K0268 (which appears to have everything from 57K0267), plus a bunch of extra tools for working on the engine, transmission and transfer case. (I'm not sure it has a diff spreader or anything in it.)

I bought one off eBay and it had engine hoist attachment and the rivet gun with the 3 heads new in the box for 500.00
The rivet gun and heads are worth more than that 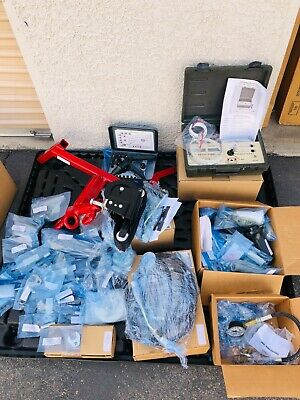 It looks to me like it has pretty much all of the tools you would ever need, except for the rear caliper retraction tool. All in all, I'm happy with the purchase for about $550 + shipping.
Last edited: Thursday at 6:11 PM
M