WASHINGTON — A group of veterans didn’t let the federal government shutdown stop them from seeing the World War II Memorial on Tuesday.
The government had closed the memorial due to the partial shutdown of the government, which went into effect Tuesday morning. But with the assistance of lawmakers, a group of Honor Flight World War II veterans knocked over the barriers to see the site.
The Honor Flight program pays for veterans to travel to D.C. to the memorials.
The veterans’ decision to ignore the closings quickly got the attention of Capitol Hill lawmakers.
“I know that today we have Honor Flight veterans flying into Washington to come and enjoy the memorials here,” House majority leader Eric Cantor said at a press conference Tuesday. “I’m told that they are at the World War II memorial site, regardless of the barriers.”
Cantor said those veterans — as “people who have served this country” — should “have the ability to enjoy that site.”
The veterans appear to be from Iowa. Earlier on Tuesday, Fox 5 in DC reported that 150 World War II and Korean War veterans risking arrest at the memorial. One journalist at the site reported that Iowa Rep. Steve King, a Republican, played a role in helping the the veterans break into the memorial.
That report, Leo Shane III of Stars and Stripes, chronicled the scene on Twitter on Tuesday in a series of tweets.

All I can say is Good for them. If anyone is entitled, they certainly are.

The White House and the Department of the Interior rejected a request from Rep. Steven Palazzo’s office to have World War II veterans visit the World War II memorial in Washington, the Mississippi Republican told The Daily Caller Tuesday.
Palazzo helped the veterans commit an act of civil disobedience against the Park Service Tuesday, when the heroes stormed through barricades around the closed memorial. (Related: WWII vets storm closed memorial as GOP congressman reportedly distracts cops)
The veterans were visiting the memorial as part of Honor Flight, a non-profit that provides veterans free transport to the nation’s capital to visit the memorials to the wars they fought in.
“We got the heads up that they will be barricaded and specifically asked for an exception for these heroes,” Palazzo told TheDC. “We were denied and told, ‘It’s a government shutdown, what do you expect?’ when we contacted the liaison for the White House.”
Palazzo’s office was in touch with the heads of the National Park Service, the Department of the Interior and the Capitol Police. He says all these officials rejected his request to allow the veterans, many of whom are octogenarians and some of whom are in poor health, to attend.
Palazzo, a Gulf War Marine veteran who has participated in all five of the Honor Flights, blames the White House for making it harder on veterans and playing politics. “At first I thought it was a huge bureaucratic oversight,” Palazzo told The Daily Caller, “but having talked with the officials I can’t help but think this was politically motivated. Honor Flights, which bring WWII veterans to the nation’s memorials, are planned a year in advance and cost anywhere between $80,000 to $100,000. How low can you get with playing politics over our nation’s veterans?”
In a statement, Palazzo noted that he is introducing legislation to ensure that all Honor Flights are granted access this week. “This is an open-air memorial that the public has 24/7 access to under normal circumstances — even when Park Service personnel aren’t present,” Palazzo said in the statement. “It actually requires more effort and expense to shut out these veterans from their Memorial than it would to simply let them through. My office has been in touch with NPS officials and the Administration to try to resolve this issue.”

Thank you for bringing this to our attention

And Thank God for our Veterans, and that at least they still have a big enough set to stand up for the rights they fought for, even at 80 or 90 yrears of age. JT

Good for them! If anyone should be able to do this they are number one

A lot of those old guys are still full if spirt.

Our prayers for a quick and workable solution to the root problems of what's currently facing this nation.

I am concerned that if this becomes a prolonged event, some will regret "Waking the sleeping giant", or in this case some men who have already looked satan in the eye and didn't back down then, nor will they quit this battle..... 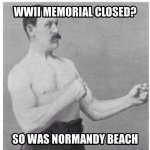 Actually watching the news I saw Congressman Gomert from Texas say that the guards did not know the law. Congress has the legal authority to inspect any of the national monuments at anytime with no warning. He said that others from Congress that were also in attendance Monday thought what better way to inspect the WWII memorial than to have the WWII vets do it for them and they let them in.

Contrary to what has been reported the vets respected the barricades until Congress let them in. Good for every one of the Congressmen who helped.

Yeah, "Storming" the gates is a media hype fabrication.

But I read it on the Internet.

Let us remember that these troops, sailors, airmen and marines don't do much "stormin' " at 90 years old, but they can indeed roll though any obstacle just as they did in WW2.... Just with a bit of assistance and "clout" from those with true and valid authority over these monuments and open areas.

God bless our vets and troops.

Capitol police were busy at the time with a woman and child in a black sedan.

There is a Honor flight from Wis. going and that made the news, too. Sounded like they wouldn't be denied either.

Fishtail said:
Capitol police were busy at the time with a woman and child in a black sedan.

There is a Honor flight from Wis. going and that made the news, too. Sounded like they wouldn't be denied either.

They D**n well better not! It would be an intolerable disgrace to deny any troops, especially COMBAT VETS.

I believe I would drive to DC to support this kind of civil disobedience if needed. Shouldn't the park police be at home and not working? Smells like a political stunt to me.

Love the media hype "Storming the barricades". God Bless these men but I doubt they are storming much more than a bowl of cornbread and milk. I'm glad we have a few good representatives left who let them on to the memorial.

Funny thing is I saw the news interviewing this old WWII vet at the memorial and he said "Normandy was closed too and we took care of that". I could say more but it would surely get me banned.

It doesn't seem to be mentioned in here anywhere, but one of the Park Police officers was asked by a reporter why he was standing there, and was he going to do anything about it.
His reply was "I'm NOT going to enforce the no loitering rules on a bunch of WWII vets. I'm a vet myself". (That's as close as I remember to his actual words). Now THAT is an excellent example of "officer discretion".

heading downtown to check it out

I will be in Washington, DC on Oct 12th in a 1776 Colonial outfit for another matter and I will go over to the WWII and The Vietnam Wall to see for myself what's going on. If I make it home I will give an AAR JT out

jatonka said:
I will be in Washington, DC on Oct 12th in a 1776 Colonial outfit for another matter and I will go over to the WWII and The Vietnam Wall to see for myself what's going on. If I make it home I will give an AAR JT out
Click to expand...

Will you be rolling into DC in an MV or Civilian "camo"?

Just wondering what to watch for on CNN & FOX NEWS.

That's funny. I'm riding the Greyhound to Union Station, DC. I am scared sh#tless to do this so I am surely not driving my truck down there. I sure wish someone would meet me at the West Lawn of the Capitol on October 12th at noon. I could use the support. What I am doing is for all of us. JT

JATONKA: If I were closer I sure would meet you there.

jatonka said:
That's funny. I'm riding the Greyhound to Union Station, DC. I am scared sh#tless to do this so I am surely not driving my truck down there. I sure wish someone would meet me at the West Lawn of the Capitol on October 12th at noon. I could use the support. What I am doing is for all of us. JT
Click to expand...

Do you mind expanding on what your going to DC for? I'm sure there are many of us that would support you morally, even if we can not be there in person.. if it is not fourm friendly, I understand..