So, I had brought my oldest son's tractor down from NH to have a friend do some extensive work on it. Since that storm was headed for us I wanted to trailer it back up to him before all this snow came down so he could plow the driveway instead of having to shovel the 14" by hand (it is a long driveway). Roads were dry and free of most of the salt and crap, so this past Wednesday night was a good time to do it.

Anyway, truck has had trouble starting ever since it got really cold and I knew she would not want to kick over in this weather (I'll trouble shoot after it warms up...in the spring!!). Well, I got lucky on Wednesday and the temps peaked at a balmy 25. And, as it turned out, although the truck was cold soaked for the last three weeks, it managed to fire up after about two minutes of cranking. After she warmed a bit, she ran fine, but due to the cold, heat in the cab was scarce, to say the least. I did put my "pipe insulation" winter front on, but it didn't do much good. Thankfully, I had purchased some $7.99 seat warmers last year at Home Depot and they worked great !! Best $7.99 I have spent on my truck yet.

I got to my son's house two and a half hours later, at 8 pm, and the temps had dropped into the single digits. We unloaded the tractor, put the plow and chains on and then I headed back to CT. Man, my feet were really cold by the time I got back to my house. If it wasn't for those fantastic cheap seat warmers, I would have been frozen like a popsicle!

I will have a look at everything when it warms up, as I am wondering why I wasn't getting very much heat during my long drive. My other M1009 may have taken forever (about 10-15 minutes) to warm up, but she did put out heat in the winter.

Check the thermostat first. Also maybe the heater core is clogged and not moving much coolant through it. Also make sure the door in the heater box is closing all the way and not letting cold fresh air in to the cab.

Been Covered many times.
Either heat core or blend door or a combo of
both.

Mine works fine even after I replaced the original brass and copper one with an aftermarket aluminum one. I was disappointed with the appearance of the newer part as it was half the thickness of the old part. It installed just fine and will run you out of the truck from the heat once the engine is warmed up. We also live in different climates but I think the new one works fine so long as hot coolant is flowing through it. Post a link to the 8 dollar seat warmers because I'm sure my wife would love one. Her Tahoe doesn't have that option, her last truck did and she misses that one. 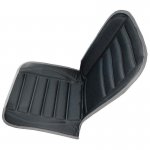 You can see the hose level in the radiator tank. If the coolant is below it, you will not get heat in the cab.

And I always hate to say this. But if you have full coolant in the radiator when cold. Do you ever discover that the coolant reservoir is full after a drive? Do the hoses upper and lower seem to be holding pressure. It is very hard to diagnose from afar. Check your coolant level when cold. Fill it to the top in the radiator 1" lower. And fill the over flow to the full line. Drive it and check back. You need more modern equipment in this arctic winter we are having. Report back.

I remember some of the cold kits for trucks had front covers for the radiator with flaps to open a small port for air. Some guys put a piece of cardboard to cover the radiator. Thoughts?
S

Those are the ones. I got them when they went on clearance after last Christmas for $7.99. They work great !
S

I will be checking the blend door and coolant levels tomorrow. I do realize that highway speeds and single digit temps aren't the M1009's best environment.