HELP!! Getting the carrier up and running is requiring some parts. FP looses prime, no adjustment on the idle circuit on the carb and the filter is full of.....stuff.

Got the fuel pump part handled, Then and Now put together a nice kit, Got a carb kit on the way from The Carburetor Shop.

One tank had ugly gas in it and the other wasn't too bad. The switching valve was galled up from what looks like debris passing through it. The tanks have been coated sometime in the past. I pulled the pick ups from the tanks and found the issue, the right side tank strainer is in bad shape, covered in the same stuff I found in the filter at the carb and the screen is coming apart, this is most likely the issue that caused the galling in the switching valve and carb issue.

I have searched and come up with nothing on the screens and the valve. I have tried Midwest Military, he sold his stuff. Brian Asbury from Ont Canada, he sold his stuff to a man named Colin Alford also in Ont, Ca. but the e-mail address he provided is invalid.

Any one have a lead on where the screens might be found? I have not tried over seas yet. I do not know if they are the same as an Aussie carrier or the T16.

give an idea of what it looks like or a photo of remnants
Exact where was it in the system?
Probable dimensions?
a fuel screen could look like this one 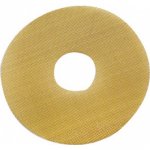 I'll see if Craig can take a pic and send it to me.

here are a few pics, in one, you can see how the screen attaches to the pick up.

You mentioned the valve unit was messed up, if it is like the tank selector used on Canadian Military Pattern trucks it is located on the suction side of the pump as so it is a source for air leak. I've had fuel starvation problems on my CMPs were the valve tapered leak air in causing the pump to loose prime or pump air and gas.

From some of the names you mention I suspect that you are also following Carriers over on MLU http://www.mapleleafup.net/forums/index.php if not you may find it a useful information source.

Not a member there, I will give that site a try. The switching valve is indeed on the suction side, mounted on the bellhousing. Took it apart and found that the tapered valve is a tad scored and the top seal is almost non existent. I believe I can repair the valve. Worst case for the strainers is a sheet of screen from McMaster and make new ones. These will be easier to fab than the inlet screen on the aircraft Stromberg carb on the M7. Ended up using a Y strainer on that.

Fiqure what screen mesh you want and make a couple, just silver soldered together.
You already have the ends.