All those last minute voters waiting for a picture loaded campaign.

Happy holidays to you all.

First, thank you to the people that have voted, especially the two that voted for me! I can't tell who you are, but thank you! If you haven't noted yet, there's no time like the present!

Second, I am going out on a limb and am going to call this race early. My crystal ball is warmed up. I predict that a wrecker, 5 Ton cargo truck or CUCV II will win this month's MVotM contest!

Now, time for some campaigning....

I bought the M936A2 from a friend of mine back in May. Wes helped me move it the ~35 miles home. The recovery was interesting to say the least! We got a torrential downpour that day and the ground was very soft. 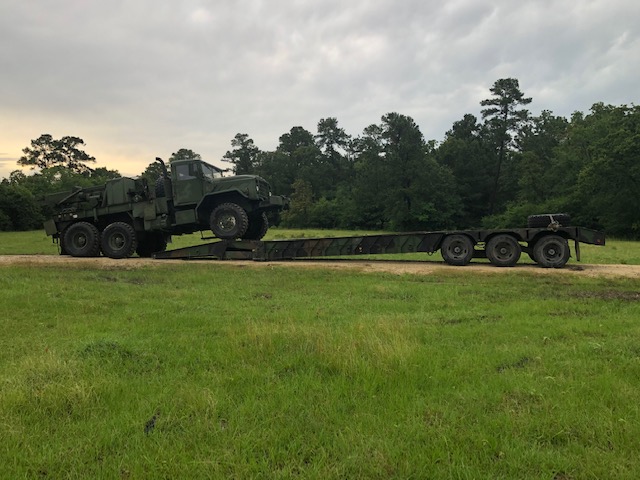 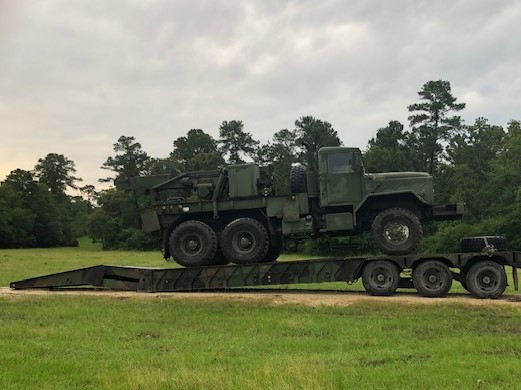 Step 1 resulted in the neck of Wes' trailer sinking into the ground. Fortunately, we had a wrecker! After backing the truck off the trailer, we used the wrecker to lift the trailer neck and then slid some railroad ties underneath for cribbing. That would have been great, but we blew a few hydraulic hoses on the wrecker in the process. Talk about messy!

Once the trailer was secure on the railroad ties, the wrecker was loaded again. 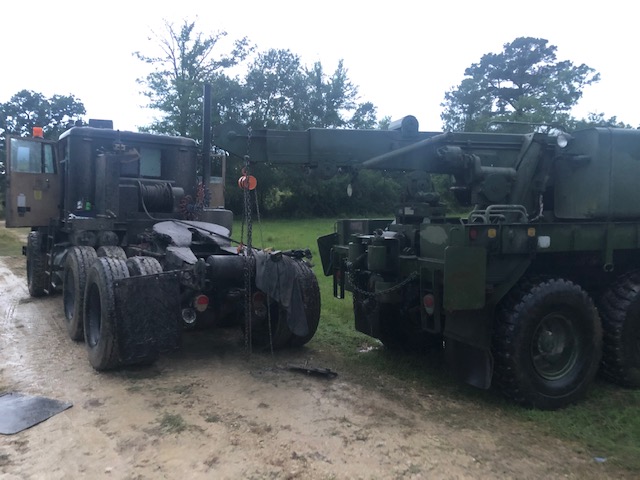 Wes' designed the roller on the back of his truck to 'fail safe.' A lot of weight from the wrecker was on the tongue of the trailer to give Wes traction as he drove on the wet roads. It was enough weight to break the roller. Fortunately, Wes was prepared with extra parts and we had a wrecker to help with the lifting. Notice the chain fall.... Yeah... There is no hook on my wrecker. The boom cable needs to be replaced.

After repairing Wes' truck, the wrecker was loaded again and we hit the road. Somewhere in that process, I took a chain fall to the face (don't do that at home kids). The day was much longer than Wes and I expected. But, all in all, it was a success. We got the new to me wrecker to its new home.

When you are 120 years old, you will still tell this story with a smile on your face! And a good time was had by all!

Cannot we make a rule that contestants have to post at least one canvassing post, and a link to a thread on the competing MV?

I know that many of these vehicles have interesting and sometimes moving stories that should be shared.

Robo McDuff said:
Cannot we make a rule that contestants have to post at least one canvassing post, and a link to a thread on the competing MV?
Click to expand...

If anything, that would disqualify people from submitting their vehicle. I don't think it would make a significant difference in the end result anyways, because as papabear said,

There is a four year long thread on my wrecker restoration...need I say more...

bigmike said:
There is a four year long thread on my wrecker restoration...need I say more...
Click to expand...

a link and maybe some highlight pics would be nice, no need to say anything at all

Some BEEEEEEE UTIFUL MV up this month..It was hard to decide, but boy does that CUCVII look clean. Wreckers, love some wreckers too (brings back some great memories) M543 (it did duty in Camronbay Vtnm, M816, M936, M10XX in my past.

Voted, but it wasnt easy

Can't wait longer, voting now. Later today I will forget to vote, since we are in front of you in time. So Swiss' tan wrecker it is.

Not the nicest most perfect restored and repainted, but it touches a snare, if you know what I mean.

Surprised to find the polls were still open. I just voted. I hope that was OK.

Congradulations dmetalmiki! I will send you a message for your decal.