Here's some information about the tow light bar and cable assembly.

After purchasing a tow light bar earlier this year, I quickly realized what several others already knew. The tow light cable with an 8-pin male plug is difficult to find. I've managed to acquire two of the 8-pin male plugs. One is just the plug with wire leads and the second is part of a complete 50-foot cable. Much to my surprise, the 8-pin plugs are slightly different. One fits my tow light bar and the other does not. The only noticeable differences are the location of the two (for lack of a better term) "guide pins" on the lower half of the male plug and a slightly different part number.

My two 8-pin male plugs have slightly different part numbers. Actually, they differ by one number: LADD HD36-18 8SN-059; and LADD HD56-18 8SN-059. I've been told that the "HD36" means that the male plug was shipped without wire leads; whereas, the "HD56" was shipped with wire leads. I do not know if the different part numbers have any correlation to the location of the guide pins.

Here is a picture of the male end with part number LADD HD36-18 8SN-059 and its corresponding female end:

Here is a picture of the male end with part number LADD HD56-18 8SN-059 and its corresponding female end:

Lastly, the male plug with part number LADD HD56-18 8SN-059 came with a cap as pictured below. The other 8-pin male end did not have a cap.

If anyone is making their own cable assembly, the information in this thread may be useful:

I had same problem with my cable. 20 min with a small jig saw blade fixed it.

Glancing through the classifieds today, I saw an add for Oshkosh MK48 60-foot winch control pendant cables. The male connector on the cable looks awfully familiar. Since posts in the classifieds get deleted, I'm not going to post a link. But, here's the content of the add: 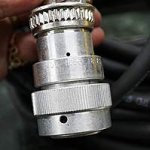 I can make out "LADD HD 56 18 ..." in the third picture. I'll contact the seller to confirm the part number on the male plug. Also, it looks like only four wires are used in this cable. I believe that should work for someone that does not plan to use black out lights on their tow light bar. Maybe this is another source of cables / male plugs for the tow light bars out there.

He is a member here.

I bought a NOS light bar and a fresh newly made connecting cable from member Joehamilton . Joe has a source to buy the proper plugs. I had a custom length 8 ft. Cable made up to run on the rear of my wrecker for the auxiliary lights.

i need the 8 wire end for my lights. if joe has anymore for sale

camoyj7 said:
I had same problem with my cable. 20 min with a small jig saw blade fixed it.
Click to expand...

Excellent solution camoyj! I initially planned to file down the male end of the plug. However, your solution will allow me to use my tow light bar with either style male end.

I got after it with a jig saw blade this morning. I admit, it took me longer than 20 minutes, but it worked none the less.

Today was a big step in the right direction, but I am not quite there yet. The center marker light didn't work. I'm hoping it is just a loose connection on the tow light bar. We'll see. Also, the cable I purchased has the turn signals wired backwards, which shouldn't be too difficult to fix.