What have you done WITH your FMTV ( trips, Rescues etc) NOT: fixes, updates etc

Use this thread as the place for your trips, adventures rescues, etc. that do not warrant a whole new thread.

For those.... "she kicked my arse today and other mishaps; like flat tires, spills out of cab, hit head, and other broken shiat" yet do not warrant a whole special thread see What has your FMTV done to YOU
Last edited: Jan 27, 2019

Moved the other cab to storage. 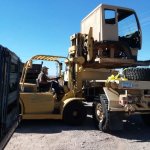 We had a winter storm come through western Alaska. since Friday afternoon I have recovered 5 pickups out of the ditch and 0ne case w24 loader. sorry no pics but the snow was just coming down too hard.

SOP. Towed a car out of the sand today. Pretty much every day at the beach I get 1-5 people come ask me or flag me down for a recovery. It's actually worse when there is almost no one out there on the weekdays (fewer trucks running around to pull folks out). The big fun is late at night at the weekend bonfires when all the college kids are hammered and stick multiple trucks trying to pull eachother out.
A

Adventure Driven said:
Is it ok to post this here

Very nice video. Would just suggest that the music be dropped, lowered, or chosen to be less distracting. Would rather hear diesel and gears : )
G

Using the SRW to pull some logs out of the woods. Started with some small logs. The largest I pulled was this ash log. It is about 24" on the butt end and 45' long. I cut it in half and chained the to pieces together to allow it to move like train cars. This made it easier to get around a couple of obstructions. The SRW moved this with ease. It was a cold dry snow so there was not alot of friction. Snow depth was about 2 feet. I did have to pull the ash logs up a steep hill. Some of the logs were pulled a long distance. The longest pull only had 5 wraps left on the winch drum before taking up a little slack and starting the pull. SRW operations are best done by 2 or more people. "Free wheeling" the winch drum is not easy. Best to anchor the cable end, disengage the which drum and back the truck up to remove cable from the drum.

I'm one of the schlubs in Colorado that got hit with the massive blizzard last week. Tuesday evening I plugged in Goliath's (M1081 A0) block heater. Wednesday worked at home.
Snow day Wednesday:
0930 - rain changed to snow
1230 - cabin door on 5th wheel I live in could not be pushed open against snow outside
1400 - furnace would not run, snow had blocked the intake and exhaust
Intermittent power flickers all afternoon but did not lose power. Electric heaters and blanket kept me warm overnight
Recovery day Thursday:
0830 - opened up bedroom emergency escape window, pitched large cooking wok skillet, broom and myself through window into snowbank six feet below
0930 - finally cleared enough snow using wok to find snow shovel, and clear drift in front of cabin door that cleared roof line
1100 - got Goliath stuck in snow drift in campground. Wet heavy snow on top of slush about 3+ feet deep. SRW double-line pull extracation
1200 - met other locals at church and began recovery efforts for stuck drivers and vehicles. Personally recovered six vehicles and assisted several others. Four cars, a dually pickup, and an M35.
M35 belonged to a buddy. M35 battery was dead, buddy was living in a camper and had lost electric over 24 hours ago, road was blocked by 10' drift. Buddy and I went cross-country through pastures, winched dead M35 out of paddock area into field, then pull-started the M35.
All in all, a good day, but exhausted. Still had to clear snow from furnace...
Recovery of M35. Wound up snapping off fence post on passenger side:

Stopped after pull-starting the M35:

M35 headed cross-country into the sunset:

Wind was over 70mph Wednesday clearing any flat open areas. Anything sheltering from wind caused drifts though. That's why the fields look clear. But the furrows were several feet deep with snow.

Toted home a heavy a$$ insulated storage container with a 3,000 lb water tank inside.

2-1/2 hours no issues. Well other than the cooling fan solenoid crapping out.

Went and did some offroading.

At 8:40 there is a yellow HMMWV that passes us. It's interesting because it's from an offroad tour place, seats 14, and is right hand drive. I don't know what company it's from - it has no markings.
Last edited: Jul 1, 2019

Last weekend: About 2000' climb from the highway to a remote cabin outside Hawthorne Army Depot, NV. Goliath (my M1081) did fabulously on the climb up the dirt road. My buddy's F350, not so good, overheated (cracked radiator).

wandering neurons said:
Last weekend: About 2000' climb from the highway to a remote cabin outside Hawthorne Army Depot, NV. Goliath (my M1081) did fabulously on the climb up the dirt road. My buddy's F350, not so good, overheated (cracked radiator).
View attachment 769349
Click to expand...

Nice. I do a lot of dispersed camping out that way on Walker Lake and South the base. I've stared across the lake from West to the East so much it is one of my life's missions to get over there some how. Probably coming in from the East of the lake and North of the base since I don't belong on the base/gov property. Lots of military aircraft to gawk at too. Love it down there. Plus, they have a grocery store!

Been on the beach this past weekend. Sitting out the crowds until after the 4th is over.

Sounds like we've covered some territory very close by. I'm new to the area though, am spending more time farther north along Hwy 50. But would like to explore more near Walker Lake as well. I was looking, there's Cotton Wood Canyon trail that meanders quite a way west from the town of Walker Lake. Can't tell the quality of the trail though. Would probably be good to have a good Quad or SxS as a backup.
And a grocery nearby is a Bonus. The second reason for not overnighting at the cabin was lack of food preparation planning...


Nomadic said:
Nice. I do a lot of dispersed camping out that way on Walker Lake and South the base. I've stared across the lake from West to the East so much it is one of my life's missions to get over there some how. Probably coming in from the East of the lake and North of the base since I don't belong on the base/gov property. Lots of military aircraft to gawk at too. Love it down there. Plus, they have a grocery store!
Click to expand...

I can confirm from experience, you can get an LMTV stuck in snow. During the March blizzard in Colorado, I got my M1081 stuck twice. First time I tried to punch through three feet of snow drift. It was well-packed and after skimming the surface for a few feet, the weight dropped the front into the pack. Snow trapped in front and behind the axle got me stopped quickly. A little shoveling and a double-line pull with the SRW got me out. The second time was similar but not as deep, and just couldn't get traction.
I have a set of chains, but was mostly on snow-packed pavement and didn't need them. Mostly.
However, I was able to backtrack through some frozen fields, drag a disabled M35 out of a paddock, then pull-start him in the field.
Sorry, no videos though it did happen...


Reworked LMTV said:
Love to see some video of an LMTV in 2 feet of snow : )
Click to expand...

Heh. You can bust through trees and do some pretty impressive dirt embankments in an LMTV. A modified Suzuki Samurai had just blitzed down the embankment, through the trees and back up to the road. Goliath (M1081) just bulldozed through them. At the end of the video, you hear an air leak and I'm calling a halt for the leak. A limb had twisted one of the air tank drain valves just enough to hiss without dropping too much pressure.
I'm driving, coworker is filming as passenger.

What were those last words. "air leak"

One of the branches twisted open an air tank drain petcock. I could hear the air leak and pressure was slowly dropping on the gauge. Realized there was a leak, I was worried I'd ripped open a CTIS line. But was just the petcock. Quick and easy to find and fix.

Floridianson said:
What were those last words. "air leak"
Click to expand...

wandering neurons said:
Heh. You can bust through trees and do some pretty impressive dirt embankments in an LMTV. ...
Click to expand...

you folk please do not post video's like this publicly. All your doing is giving fodder to folk wishing to ban larger vehicles from offroad adventures INCLUDING the drivers whom truly respects principles of good public land stewardship.

If video is on private land then solidly state so in video's title etc. to reduce the flack/issues the vid causes for others.